Skip to content
A new Samsung laptop featuring an NVIDIA RTX40 mobile GPU has been spotted in the Puget Systems’ online benchmark results database. Interestingly, this is the first sign we have seen of an “NVIDIA GeForce RTX 4050 Laptop GPU,” and this leak comes ahead of any significant desktop RTX 4050 leaks or rumors.

There are two PugetBench results to mull over. However, they are both benchmark runs in the PugetBench for Premiere Pro tests. Of course, this is a benchmark based around Adobe Premier video editing performance. Thankfully, alongside an overall score, the benchmark produces a GPU score, as GPUs are useful for accelerating video editing performance. While we are happy to see what are probably the first benchmark results for an RTX 4050 Laptop GPU, bear in mind that the score could have little or no correlation with, or relation to, this GPU’s performance in PC games or even final production results.

Across the two benchmark runs, the RTX 4050 accelerated system achieved GPU scores of 57.4 and 51.3. We don’t know why there is such a sizable difference, as all the reported system specs of the Samsung 960XFH laptop appear to be unchanged. Perhaps there was a driver update applied, and a technician was testing for any performance impacts.

If we average the two GPU scores, we get a number of approximately 54. So, in looking for some significance to this score, let us see what a selection of other modern laptop and desktop PC systems score. Check out some rival system Premiere GPU scores below, for context:

In accelerating video editing performance, the unreleased updated Samsung Galaxy Book laptop appears to offer good performance compared to the RTX 30 series, if the results unearthed are genuine and representative. 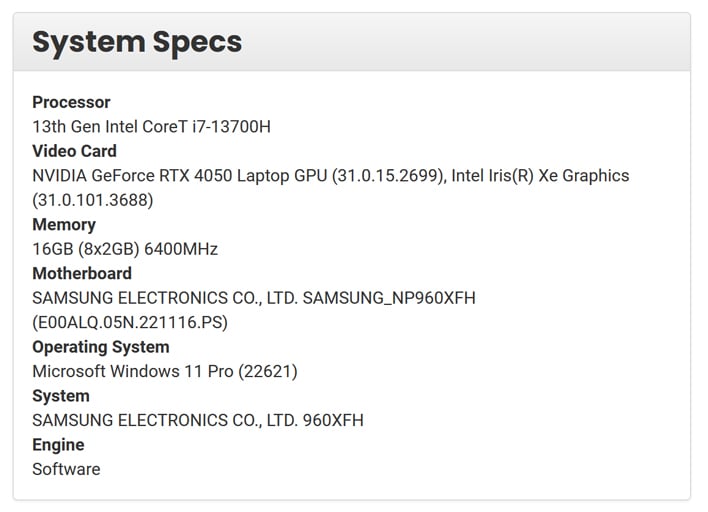 We have talked almost exclusively about the laptop’s GPU so far, but it also appears to boast an unannounced CPU in the form of the Intel Core i7-13700H CPU. This Mobile Raptor Lake processor is expected to be a 45W part with 14C / 20T configuration.

With the new year rapidly approaching, it seems safe to assume that laptops like this are being prepared for a reveal at CES 2023 in January. These machines should go public after NVIDIA and Intel have completed their keynote presentations boasting about the newest generation mobile processors.

Athletic Footwear Market: The Global Industry is Growing and Anticipated to Reach USD 139.9 Billion by 2028

How Much Money You Should Save Every Paycheck